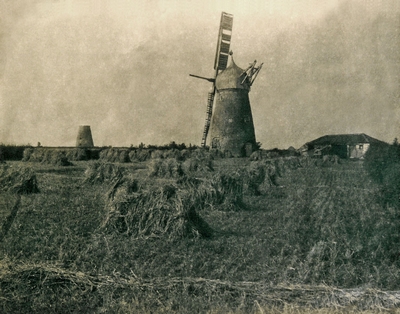 Woolsthorpe is a hamlet within the Parish of Colsterworth. The definite beginnings of it are long gone, lost in the mists of time, but two good reasons for choosing the site remain: a sheltered valley and a good water supply.

The name of Woolsthorpe is taken from Ulestanestorp, meaning outlying farmstead or hamlet belonging to a man named Wulfstan, Wulf or Ulf. The name is a mixture of an old English personal name plus the old Scandinavian thorpe meaning settlement.

In 1086 the Domesday Book treated Woolsthorpe as part of Colsterworth, but as belonging to the Archbishop of York, Aeldred, who was a Saxon. It was recorded that Woolsthorpe had 4 Sokemen, 4 Villeins and 2 teams of 8 oxen.

By the 13th century Woolsthorpe was a separate manor known as Mortimers Manor. It passed down through the ages belonging to various families of note the Sleafords, the Pigotts, the Thimelbys, the Burys and the Underwoods, who in 1623 sold it to Robert Newton, Grandfather of Sir Isaac Newton. It was the Newton familys second property in Woolsthorpe and Robert then settled it on his son Isaac as a wedding dowry in 1639. Isaac married Hannah Ayscough in April1642. With the manor went the title Lord of the Manor, also possibly the ancient rites of Court Manor and Court Leet, together with most of the property, workers and land within the hamlet.

The Newtons were sheep farmers but sadly Isaac died in October 1642 aged only 36yrs. Their son was born prematurely on 25th December 1642 (Julian Calendar); he was small and sickly and not expected to survive; he was named Isaac after his father. He spent his childhood growing up at Woolsthorpe Manor, being brought up mainly by his maternal grand mother. His mother re-married and went to live at North Witham with her second husband, Rev Barnabas Smith. At the age of 12years Isaac attended the Kings School in Grantham and later went on to Trinity College Cambridge. He spent 18 months back at Woolsthorpe to escape the Plague, during which time he did his most important scientific work: he formulated his Law of Gravitation apparently, according to Isaac, whilst watching apples fall in the orchard at Woolsthorpe; he wrote Calculus and split white light to produce the spectrum. When Isaac died in 1727 the manor and land at Woolsthorpe passed to his nearest male heir, John Newton, his uncle Roberts great grandson. The estate was sold again in 1732 to the Turnor family of Stoke Rochford, who leased the manor to a tenant farmer called Woolerton. This family remained at the manor for the next 200 years. In 1942 the manor was acquired by the Pilgrim Trust and the Royal Society who then presented it to the National Trust to be preserved for the nation. The National Trust still own the manor and usually welcome approximately 19,500 visitors annually. A descendant of the famous Apple Tree can still be seen growing in the orchard.

The older part of the Woolsthorpe hamlet consists of mellow limestone dwellings with red pantile roofs, set in small groups along narrow winding lanes, interspersed with dry stone walls. Most of the green spaces have been filled in with new buildings of red brick or stone. Many of the older properties disappeared during the 1920s and 1930s when the rural tranquillity of Woolsthorpe was interrupted by the introduction of open cast iron ore mining around the hamlet. The first area to be mined by Frodingham Iron and Steel Co Ltd was off old Post Lane, known locally as the Beauclos the origin of the word in French means Good Fields! In 1932 No2 Extension Pit was opened up and followed the line of the Water Lane valley, westwards. Quite a few houses and rights of way were lost to this development one being the footpath called Merrycock Hill which led up from Water Lane to a group of houses and two windmills. During the ore mining many Roman remains were unearthed, proving people have lived around this area over many centuries. In 1941 a new quarry to the north of Woolsthorpe was opened the North Pit and mining in the area continued for a further 30 years. The company went through several name changes: Frodinghams became Appleby-Frodinghams, then United Steel Companies and later British Steel Corporation. After the iron ore mining finished in the early 1970s a tyre company Vaculug took over the yard and buildings on the site between the two settlements of Woolsthorpe and Colsterworth. They have since gone and at present it is proposed to create a housing estate on this site.

Old Post Lane used to be sprinkled with cottages which are now longer to be seen. Post Lane is so called possibly as stage coaches carrying the post (mail) alternated their routes between this lane and the Great North Road to confuse highwaymen such as Dick Turpin, or it may be a reference to early post windmills being built on the hill along Water Lane referred to by Isaac Newton.

Further up the hill from Post Lane is the Woolsthorpe cemetery which was consecrated in 1886, being half for the use of Members of the Church of England, and half for persons not belonging to the Church of England, in a field belonging to Brownes Hospital on the west side of an antient road called Post Lane, situated between Woolsthorpe and Colsterworth, according to John Mirehouse, Rector of Colsterworth, in his book of the Parish dated 1902.

One of the oldest buildings in the hamlet is Chapel House now a private dwelling at 22 Newton Way. In the 13th century it was recorded as being the Chapel of Ease to William Mortimers Manor, where locals, who could not get to church, could worship. Also travellers could stay over night, rather like the monasteries. The chapel was surrounded by a grave yard and this was cleared and lowered to make a garden, the road and stack yard, by cartloads of human bones being taken away, around 1800 when the chapel was converted into a dwelling. Although it has recently been extended the original chancel arch is still visible in the east end of the building.

Hospital Farm on Newton Way is now a private house but was originally a working farm with 14 acres of land and belonging to Brownes Hospital of Broad Street Stamford.

For many centuries the pond formed the centre of the hamlet. It was divided into three sections and edged by red bricks possibly made in the brick works at Dunkirk. The first section was shallow and horses which had been working on the land could walk in to clean their feet; the next section was deeper and the horses were encouraged to drink from this; the third section was covered in and accessed by three stone steps and wooden doors, which were opened to reveal a pool of water to dip your bucket in to collect drinking water. The pond has long since been filled in but you can still see the red brick edging. The rat catchers cottage stood to the side of the pond, and was already a ruin in the early 1900s.

It is thought that the row of cottages now 29, 31, 33 Newton Way could have been outbuildings to the manor, as when alterations were carried out at 33 bits of wheat and barley ears were found within the roof space. Also if you look carefully in the wall of this cottage you can see where the post box was originally sited it is now on Woolsthorpe road, opposite the telephone box. Along from this ancient row of cottages is an area of grass called the Pinfold. It belonged to the Lord of the Manor and here any traveller could pen his animals for one night only without charge. At one time in the field to the side of the manor was the Dower House the only traces that remain are lots of uneven humps. On J C Barrows sketch of 1797 the dower house is shown and the field is referred to as Newtons Close, now called Beesons. A row of cottages on Woolsthorpe Road used to be called Beesons Row but are now numbered along with Woolsthorpe Road. They were just at the place where the railway line cut across Woolsthorpe Road from the sidings in the North Pit two modern houses have now been built on this piece of land.

In the 1900s there were two shops in Woolsthorpe, run by Mrs Burton and Mrs Simms. Burtons shop was in the house now known as 47 Newton Way and Mrs Simms ran her grocery store from Spring House, whilst her husband, George, had a bakery business. Later on the community was served for many years by Chads Shop, a large general grocery store run by Mr and Mrs Len Chadwick from their house on Woolsthorpe Road.

Woolsthorpe used to have its own Inn the Sir Isaac Newton which was kept for many years by the Reed family. It was situated on the corner of Reads Lane and Woolsthorpe Road and closed sometime during the late 1950s. On the building is a stone tablet W.E.T. 1803 which suggests it was built or altered by a member of the Turnor family.

During the 20th century modern grouped dwellings were built on the edges of the old hamlet. One such development in the late 1980s, built on land formerly used as allotments on Woolsthorpe Road, is in two closes called Ingle Court. The Ingles were a family who lived in the Parish for over 200 years: Henry Ingle was Bailiff to Sir Isaac Newton, Maurice Ingle was Post Master at Colsterworth in 1834 and Edward Ingle was a Fellmonger and Worsted Manufacturer around 1842. Frederick Ingle who died in 1912 left a lasting memorial behind him in the form of a Charity, which still pays money out quarterly to the sick and poor of the Parish of Colsterworth.

Just above Ingle Court and on the site of West End Close used to be sited an old lime kiln, where the children played. It was a large round brick dome which eventually filled up with rubbish and became unsafe.

Sometime during the 1960s the roads were renamed within Woolsthorpe. Woolsthorpe Road used to be known as Top Road and Water Lane was originally The Bottoms. Newton Way used to have three names the east side was Brights Lane, the west side was Wilkies Lane and the middle part was known as The Street. Brights Lane was so called as Benjamin Bright and then James Bright, Relieving Officer North District and Vaccination Officer and Registrar of Births and Deaths for Colsterworth sub division, lived in the house at the top, now called Vine Cottage. They were recorded in the Kellys Directories of 1845 and 1881. Wilkies Lane, Giles Hill and Reads Lane each seem to have been named after families who lived there. Woolsthorpes population seems to have been fairly constant and two ancient family names recorded in 1665 - Senescall and Atter - are still found within the Parish today.