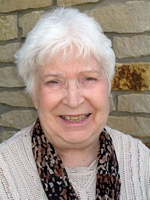 I was at a very strict girls' school - no talking in the corridor! I used to write the R.A.F. insignia in my rough book, I was always interested in the Royal Air Force. I wonder if my husband, when I met him at 15 years old, had been wearing a different colour uniform whether I would have looked at him. My family used to take me to stay at Towyn in Gwynedd on Cardigan Bay with a Welsh lady who, though she could understand English and speak it, would only speak Welsh. So I had to learn the language but I enjoyed it. One day her granddaughter, Phyllis, introduced me to a tall, dark, handsome young chap, home on R.A.F. leave having sprained his ankle playing sport. He was using his old bike to scooter down from home to the promenade. I couldn't resist letting his tyres down!

A few weeks later I found he had arranged his leave to coincide with my visit by quizzing people about it. This was in 1937/8. This time I was chased all over the beach, in the dunes and the sea. It was lovely! But in a way I resented it as my life was so full of school. I was in school teams; I was swotting for my School Certificate and Matriculation. I didn't want to be attracted to a young man and refused to let him write to me. He left Grammar School at 16 and went into the Boys' Squadron. You couldn't join the R.A.F. proper until you were 18. When he was on operations he was commissioned. He was to have become the Squadron Armoury Officer when the present one moved on. He was a Pilot Officer but on becoming Gunnery Officer, he would have gone up to Flight Lieutenant quite quickly. On the plane he was one of the gunners.

My mother took a liking to him and when he turned up on leave at my home, I had no choice as she was very fond of him. The war started when we were on our honeymoon in Chester. He had to report to his base daily to see if he had to go back. One day he left early and returned in the late afternoon with a boy carrying his flying kit. He took me home and left for R.A.F. Kinloss (Scottish Highlands). After a few months, he came to collect me and I saw him as a White Knight coming to rescue me! We journeyed by train, crawling along because of snow for one and a half days. By the time we reached Forres I could have collapsed from the severe cold in the train. We met a friend of my husband there. He took us back to a party where the fire was relit and the hot water bottle put in the bed. The first indication that this was real war was when my husband came back one afternoon unexpectedly. His crew had been changed. They had crashed into a Scottish mountain and were all killed.

That was the first indication of how precious life was. Later my husband had a posting to Graveney, Huntingdon, where Special Duties Squadron 161 was formed. The R.A.F. selected crews and the S.O.E. provided everything else. His friend, Doug Shearer, was killed after his plane crashed and he was last seen rushing around on fire. We thought that although it happened to a lot of young men, it would not happen to us. He came home one night and told me he had been to Poland and back and promptly went to sleep. He should have stayed at the camp but when he knew what his next operational orders were he'd get on his bike and come home for the evening. Then he would go back ready for Take-off. Towards the end of his tour of duty (28 operations out of 30), he was selected to return to Kinloss to carry out a special mission to Norway where the Resistance was in need of supplies, especially ammunition, and their Agent. It was March 1943 and because of very bad weather they had to return to Tempsford (Bedfordshire border). We decided that because his tour was almost over, I would pack our things and return to my parents until we knew where we were going to be.

This is where I made a mistake. I left him when I should have stayed. I am sure that was why he went missing. It took me many years to get rid of the awful feeling that he would have been alright if I had stayed. I had lovely times with the squadron, who spoiled me. I was 19 but I was a grandmother to these lads. One was called Jerry. He had three girlfriends, to one of whom he was engaged. He finished operations before my husband. He moved to Pathfinders and pretty soon he was gone too. My brother's friend was in the Army. In March 1943 he was stationed on the East Coast of England - Durham - where they were called in to help with a dreadful accident. A Wellington bomber had flown into a four-engined plane and landed on a pub. I think the four-engined plane was my husband's because one chap said they had been sworn to secrecy, to say that the accident had not happened. The whole Squadron was secret because of the delicacy of the work. We wrote to a local newspaper who put the story out but nobody remembered. It was in or near Hartlepool. Later an R.A.F. historian rang to tell me that he had discovered a Wellington SOC (struck off charge) 19th March 1943 and this seemed to confirm what we thought - nothing else has been discovered. We know, with 90% accuracy that they didn't arrive in Norway and the obvious thing is that they are in the North Sea. If there had not been an accident they could have broken radio silence.

It was suggested by Bob Hodges, Squadron Leader at the time, Chairman of the Reunion, that there could have been ice on the wings. If that were so the plane would have gone down into the sea immediately and they would have had time to break radio silence but they didn't so I think there was an accident. The Squadron lost 49 aircraft during the war, which was quite a lot. They were not all Halifaxes, there were little planes to land on the Continent to deliver agents. He was on Halifaxes. We thought at the time that because he had a compass on his uniform he would be alright and I was sure, when he was posted missing, that he was in Norway and through the Norwegian Resistance he would find his way to Sweden and from there he would return home because Sweden was a neutral country. For months I thought this because some time before, while we were drinking in a local pub, a crew came in having come back, helped by the Resistance. They had passed through France and Spain and were flown back from Gibraltar, and appeared in the Mess again. I thought this would be the same for my husband's crew.

It took me a very long time to realise it was not going to happen. This was March 19th 1943. Since then his sister has done a lot of investigating to see if we can find the plane. She wrote to the German Air Force who found out that there were no German fighter ops that night because of bad weather. It had been a pouring wet night. The operation required moonlight and fair weather. (I remember thinking to myself - they won't fly tonight, thank goodness). It wasn't to be. It was a strange kind of life but it was the same for everybody during the war. The whole of life was different. Unfortunately it wrecked my plans for the future because I wanted to be an R.A.F. officer's wife. He would have stayed in until he was 55. When this happened I was 21 and he was just 22 when he went missing on the 19th of March. I got so much correspondence. His sister has been an absolute brick trying to find out what happened. Even the divers off oil rigs in the North Sea are alerted. We hope to find the plane with its markings - well I assume it will have. So we will find it - but the North Sea is a deep, deep sea. I don't think it will ever be found. If it is, there won't be much left. This made me feel that nothing lasts for ever. It doesn't, it doesn't.

After his death I was invited to Buckingham Palace to receive his Distinguished Flying Cross. That put a bitter taste in my mouth. A decoration from the King was what one should be proud of, but I didn't want a decoration, I wanted my husband back. When it arrived with the citation I sent it to his parents in Wales. His sister still has it. I felt it was pointless so I didn't go to the Palace. I would like it back so that when I die it can go to my favourite niece and his too, in Australia. That is my story, a most condensed story of part of my life. About 15 years ago I started going to the Squadron Reunion. There was only one man there who was with my husband. Many were missing, many were dead. On the window-sill is the photograph given to me at the last re-union with all the aircraft that took part in that particular squadron and its sister squadron. It was an amazing time to live through. If you came through it you were lucky.

When I found that relatives were allowed to attend the re-union, I went to Tempsford to the base, now a farm. But the runway is still there. The barn is still there too, sticking out like a sore thumb in the middle of the field. This is where the Agents went into before they boarded their plane to go off to the Continent or to Norway. They were divested and checked for anything that would connect them with this country. Then they would get into a jeep to the plane and off they would go. I was with the Squadron from its inception until 1943. I then kept in touch with it for another one and a half years. I discovered at the re-union that those who would have known my husband were no longer there. Most of them had died. I kept on going as much as anything in memory of him. We met at Tempsford Church for a Memorial Service, and then to the Anchor Inn on the A.I. for lunch, we had two priests with us. The second priest would give a service in the barn and it was lovely.

When I first went to the barn I took a huge bunch of pure silk deep red roses with a little note to my husband and his crew. Would you believe it, at the penultimate reunion I went to, some rotters had stolen everything in the barn they could lay their hands on including my roses! So anything that remained was taken away and locked up in the church. Wasn't that a dastardly thing to do? My roses would fetch quite a bit of money. They would be sold along with the wreaths. The crews all kept together and formed a bond. They depended on one another. I have a photo of the crew including Jerry, the handsome one, the lady killer!